High rate of fire and further effective range makes the MP44 superior to the MP40. However, slightly less damage output should be a consideration.

Since this edition is a prequel that takes place in 1943, German troops are armed with the experimental Haenel MKb 42(H) (Maschinenkarabiner 42(Haenel), "Machine-carbine M1942(Haenel prototype)"). In Real Life it differed mainly from the MP44 in that it was striker-fired from a closed bolt.

Superior Accuracy and Range, decent rate of fire, and moderate damage. Ammo is scarce, and recoil can be uncontrollable.

The MKb 42(H) appears in use by German special units known as Jägers. The gun can also be used by the player once they reach a certain rank or by taking them from dead Jägers. 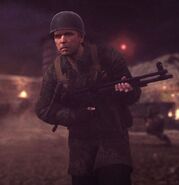 Jäger with an MKb 42(H)
Add a photo to this gallery
Retrieved from "https://sniperelitegame.fandom.com/wiki/MP44?oldid=7943"
Community content is available under CC-BY-SA unless otherwise noted.